Description: The adult is about 1/4-inch long, yellow-green with a black head and antennae. There are twelve black spots on the wing covers (elytra). The larva (rootworm) is cream colored and about 3/4-inch long when fully developed, with a brown head capsule and bearing three pairs of short legs.

There are several other common Diabrotica species in Texas: 1) the western corn rootworm, C. virgifera virgifera LeConte, a pest of corn in the high plains that can be recognized by adult beetles having a solid pale green elytra and with no dark edge on the upper part (femur) of the hind leg; 2) the Mexican corn rootworm, D. virgifera zea Krysan & Smith, a pest of corn in central and south Texas with adults having a solid pale green elytra that may be marked with faint stripes, and with a dark edge on the hind femur; and, 3) the banded cucumber beetle D. balteata LeConte, common in soybeans (larvae feed on soybean roots) and some vegetables with the elytra of adults being bright green transverse yellow bands; the northern corn rootworm, D. barberi Smith & Lawrence, occurs in the Texas panhandle.

Life Cycle: Adult beetles overwinter and become active in the spring, feeding on a wide variety of host plants including weeds and grasses. They enter corn and sorghum fields soon after plants emerge and lay eggs in the soil. Eggs hatch in 5 to 11 days and young larvae crawl through the soil and feed on roots of corn, sorghum or other hosts. Larvae develop through three stages (instars) in 10 to 16 days before pupating and then emerge as adults after 5 to 12 days. Thus, the development takes 20 to 39 days, depending on soil temperature.

Habitat and Food Source(s): Chewing adult beetles and larvae (rootworms). Injury to corn and sorghum occurs in the seedling (6 to 9 leaf) stage of plant development. Larvae chew along roots, excavating grooves and tunnels. Often, the larvae tunnel directly into the base of the stalk, stunting plant growth or killing entire plants, thereby reducing plant stands and yield. Adult beetles feed on a wide variety of plants including leaves and flowers of vegetables (beans, cucurbits) and ornamentals. This is one of the most common beetles found in the home garden and flower beds. Adults can be found on wildflowers or legumes with a sweep net.

Pest Status: Adult beetles feed on leaves and flowers of some plants and larvae feed on roots of corn, sorghum and other plants; medically harmless. 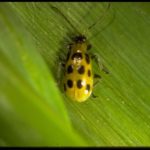