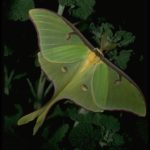 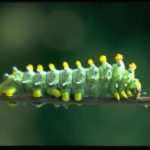 Description: These moths are large, with a 4 to 5 inch wingspan. Wings are light green, marked with transparent spots and a pink-purple or yellow forewing margins and hind wings bearing long twisted tails. Antennae are feathery, with antennae of males being more feathery than those of females. Caterpillars are translucent light green with a pale yellow horizontal line along each side and reddish-orange fleshy knobs (tubercles) on each body segment. They grow to be 2 3/4 inches long.

There are a number of other common silk moths (Saturniidae). Luna moth caterpillars superficially resemble those of the polyphemus moth, Antheraea polyphemus (Cramer), but differ because they have vertical yellow lines on each segment rather than single horizontal lines along each side of the body.

Other common silkworm (Saturniidae) species include: cecropia moth, Hyalophora cecropia (Linnaeus), has mature (4 inches long) green larvae adorned with blue and yellow spined knob-like stuctures (tubericles) on each body segment, with red tubercles on the first two segments behind the head. Adults are large (4 to 6 inch wingspan), with a background of shades of brown and marked with reddish and white and darker markings; polyphemus moth, Antheraea polyphemus (Cramer), caterpillars grow to 3 inches long, are smooth, light green with red, orange or yellow tubericles adorned by short hairs. Adults (up to 6 inch wingspan) are overall light brown with small clear spots on the forewings and large eye-spots on the hindwings; hickory horned devil, Citheronia regalis (Fabricius), caterpillars grow to 6 inches and have long orange and black filaments or “horns” arizing from the body segments directly behind the head. Adults (5 ½ inch wingspan) have orange stripes along wing veins and yellow spots on the forewings; imperial moth, Eacles imperialis (Drury)larvae grow to 4 inches long, are smooth green or light brown with yellow-orange tubericles adorning fine hairs. Adult moths (5 ½ inch wingspan) are overall yellow with brownish markings; full grown (2 inch long) caterpillars of the io moth, Automeris io (Fabricius), are green and marked with a two-color (pink and white) stripe along the sides, and covered with clusters of branched spines capable of “stinging” like an “asp” (see puss caterpillar) if handled; adults (2 1/5 inch wingspan) have yellow to brownish forwings and hind wings marked with prominent eyespots; the buck moth, Hemileuca maia (Drury), caterpillars are also adorned with clusters of spines, but are dark in coloration and develop in the spring. Adult moths have semi-transparent wings, occur in the fall, and fly during the daytime; range caterpillar, Hemileuca oliviae Cockrell, caterpillars are yellow, gray or black and adorned with clusters of poisonous spines. This species is occasionally a pest of range grasses and some cultivated plants in west and north Texas.

Life Cycle: Adults begin to emerge in the spring (March) to mate and lay oval eggs. Caterpillars develop through several molts before spinning a papery cocoon among dead leaves that usually falls to the ground. There are two generations per year.

Habitat and Food Source(s): Caterpillars have chewing mouthparts. Adults have siphoning mouths. Caterpillars feed on leaves of walnut, hickory, sweetgum, maple, oak, persimmon, willow and other trees. Adults can be attracted to lights, or males can be attracted to an imprisoned female. All colors will fade in preserved specimens when exposed to light. Mated female luna moths can be caged over a food plant on which she will deposit eggs. Luna moths appear to be increasingly rare in east Texas.

Pest Status: “Moon” moths are active at night and are harmless, caterpillars feed on tree leaves but are rarely found in large numbers; medically harmless.